You are here: Home / Uncategorized / Abuse of power: football’s culturally accepted contempt for its own referees

Abuse of power: football’s culturally accepted contempt for its own referees

Pathetic. Cheat. Joke. These are some of the more “PG” things I’ve been called over the past month while refereeing football. I give up my Saturday afternoons and Sunday mornings along with hordes of other qualified referees to ensure that the thousands of football games taking place across the country can go ahead.

I qualified as a football referee in 2011, three months after my 14th birthday. An avid football fan, I was excited to experience football from a different perspective, while at the same time earning a bit of pocket money. At a time when my friends were starting to talk about part-time work, becoming a referee seemed like a no-brainer: spending my weekend outside, running around keeping fit, doing a job that I was actually interested in. 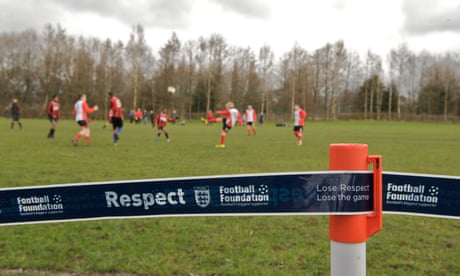 ‘More than 2,000’ referees on strike lead to grassroots postponements

I distinctly remember the excitement I felt about getting started as I walked out of the classroom clutching the certificate that said I had qualified as a referee. From that point onwards my weekends consisted of my granddad giving me lifts all over north Kent so I could referee in my local youth league. I would rush to get changed into my refereeing kit after I had finished playing for my local team and jump straight into my role as a referee.

But it wasn’t long before I received my first bout of abuse. I was refereeing an under-12s match in a local youth league and I awarded a penalty. There followed a barrage of abuse from one parent on the sideline. I was 14, refereeing a game of 11‑year‑olds playing football, and I had to experience a fully grown man swearing at me, telling me to fuck off.

I’m now 21 and when I think back to that moment it never fails to shock me. I was a child. I had to instigate the removal of an adult who was abusing me to such an extent that I had no choice but to stop the game – I was petrified. Of the 40 people watching the match, not one stepped in to help me. It was as if they had accepted that because I was the referee I should expect to be abused.

At 16 I started officiating regularly in a local men’s Saturday league. The days of youth football and dealing with parents were soon behind me as I began to become more involved in adult matches – a much easier environment in which to referee at a young age. I was looked after very well by the league I officiated in and players generally respected me as a young referee.

I’m now a level six county referee. Primarily I referee open-age men’s football in amateur county leagues, as well as serving as an assistant referee in semi-professional supply leagues. I’ve had some great experiences since I qualified as a referee: officiating in the extra preliminary round of the FA Cup, being part of the Kent FA referee’s academy and having the opportunity to officiate at Priestfield Stadium – home of Gillingham, my boyhood club – to name a few.

However, with good often comes bad, which brings me back to my recent experiences refereeing. Taking charge of a Saturday county league game I was subject to constant abuse and dissent from one team. I am my biggest critic as a referee and more often than not I know myself when I have a bad game. But on this occasion I had not had a bad game. I found myself being sworn at when I didn’t give a foul throw, being called a joke because I had given a goal‑kick and not a corner, and pathetic because I awarded an offside. It was relentless and lasted beyond the final whistle.

During a game I am good at putting up a block against things and my tolerance level is high but when this is exceeded I never hesitate to do something about it. So for the first time as a referee, I decided it would cause me more problems sending the manager who was swearing at me to the changing rooms, or to show a card to the players who had been giving me dissent. Put up with it for another 40 minutes and try to block it out – I thought that would have a better outcome than if I tried to stop it.

However, the abuse continued after the final whistle. I was sworn at and humiliated as I went to shake the hands of the people who had spent the last hour making my life hell. I reached breaking point.

After the game, I sat in my car for 20 minutes and began to think about why I give up my weekends to referee. There are plenty of other things I could do on a Saturday afternoon – why am I wasting my time on this thankless task if this is how I’m made to feel?

I came away from that game feeling worthless, and deeply nervous for the next time I would have to referee.

Every game since I’ve felt extremely anxious about taking to the pitch. Fearing another 90 minutes of abuse every weekend led me to take a little time away from refereeing. I started refereeing because among other things it was a job I knew I’d enjoy – but I found myself despising it.

In rugby, the respect given to match officials by players is exemplary. Rarely do you see players surrounding a referee to question their decisions, let alone swearing at them. Nigel Owens, the well-regarded rugby referee, is renowned for using the phrase: “This isn’t soccer” when faced with dissent. So why is it that in football dissent and abuse are accepted? I wouldn’t expect to tolerate an onslaught of dissent and abuse walking to the shops, so why is that it when I take to a football pitch as a referee it becomes OK? I’m still the same person that you walk past in the street, I’m just wearing a black kit and holding a whistle.

I know that the support is there for referees when they have bad experiences. There is always someone to talk to and the referee development officers at each county FA are fantastic at ensuring that teams and players who take abuse too far are punished. But it should never have to come to that.

Despite numerous Football Association initiatives such as the Respect campaign and the addition of sin-bins for players at grassroots level for dissent, bad behaviour towards match officials has not sufficiently changed.

Thousands of referees are believed to hang up their boots every year and I don’t blame them. Who in their right mind wants to give up their time if they’re going to be treated as I have?

Football is regarded as the beautiful game, but until all players, coaches and supporters treat referees like human beings it will be a beautiful game with a very ugly side.

… we have a small favour to ask. More people are reading the Guardian than ever but advertising revenues across the media are falling fast. And unlike many news organisations, we haven’t put up a paywall – we want to keep our journalism as open as we can. So you can see why we need to ask for your help. The Guardian’s independent, investigative journalism takes a lot of time, money and hard work to produce. But we do it because we believe our perspective matters – because it might well be your perspective, too.

I benefit from the Guardian’s high-quality website every day and would like its investigative and trustworthy journalism to remain available to everyone freely.Alice S-L, Netherlands

If everyone who reads our reporting, who likes it, helps fund it, our future would be much more secure. For as little as £1, you can support the Guardian – and it only takes a minute. Thank you.

Become a supporter
Make a contribution