You are here: Home / Featured / Chairman’s Christmas Address 2020
This year has been challenging in ways that we could not have imagined at the start of 2020. We have all made sacrifices in terms of family, friends, sport, work and socialising in the ongoing effort against the global pandemic caused by Covid 19.
With our seasons halted in March of this year and again in October, it has been difficult to enjoy the rewards that come with refereeing. The increasing pressure on referee numbers prior to the pandemic has only become more challenging this year, and it is a credit to our members that so many fixtures were fulfilled while it was safe and possible to do so. With that said, the Cork Branch was again recognised for its high standard of referees with several big outside appointments this year. Upon the resumption of grassroots football In July, some of our members were appointed to the FAI Intermediate Cup Semi Final, the FAI Junior Cup Quarter Final and Semi Final, SFAI National Quarter Final, Semi Final and Final, the Munster Youths Cup Final, the Munster Junior Cup Quarter Final, the FAI U17 Cup Semi Final as well as the Munster Senior Cup Semi Finals and Final. One of our elite panel members, Eoin Harte, was also appointed to the FAI Senior Cup Final as a Reserve Official while three of our members – Johnathon Hennessy, Chris Braganza and Paul Braganza – also graduated from the FAI School of Excellence.
Covid 19 has also caused havoc with the activities of the Branch. We have been unable to have our monthly meetings and Laws of the Game as well as our FAI Seminars. Our Charity Matches, organised by Tadg Goggin, were unable to take place this year as well as our Annual Christmas Night in Heineken Brewery, not to mention the postponement of our 60th Anniversary Celebrations. In an effort to keep things as normal as we possibly could, we conducted online meetings with our panels and provided regular updates to our members on Branch Business and various Covid concerns raised from time to time. We also proceeded with our Annual Christmas Draw which was extremely well supported and we wish to thank everyone for their fantastic and generous support again this year.
While we were unable to have our Annual Christmas Night, we were still able to present some important awards. Vinnie Coonan was awarded the prestigious Pat McAulliffe Referee of the Year award for the outstanding season he had which saw him officiate the FAI Junior Cup Semi Final as well as being promoted to a Category One Referee. Former referee Finbarr Buckley was also presented with Honorary Life Membership of the ISRS for his outstanding service to refereeing both on the pitch in the 1990s as well as pitchside and in the newspapers in his role as Press Officer for the Cork Business League. I must also mention our Treasurer Willie Long, who became the first Cork man to be elected to the role of President of the ISRS in October. This is a huge honour both personally and professionally for Willie and recognises his many years of service to refereeing at both local and national level.
Finally, I would like to wish all of our members, the observer group, leagues and clubs a Happy Christmas. Enjoy the festive period in a safe manner and hopefully together we can look forward to a better 2021 where we can all return to some level of normality both on and off the field.
Edwin McNally
Chairman
ISRS Cork Branch 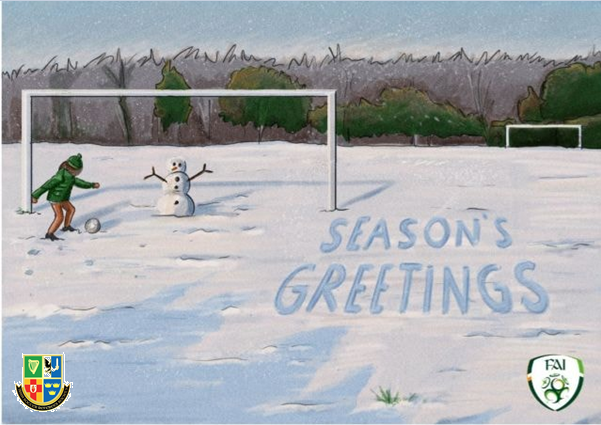