You are here: Home / Uncategorized / An Evening with Joe Brolly

AN EVENING WITH JOE BROLLY 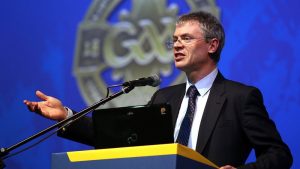 He usually played as right corner forward and was renowned for his accurate point-taking, goal-scoring ability, pace and ability to take on opponents. He was also known for his goal celebration of blowing kisses to the crowd, and had his nose broken twice during his career immediately after scoring goals. He played basketball for Ireland as a schoolboy.

Since retiring he has fashioned a niche in television punditry, described by one critic as “the most lippy and articulate pundit on Irish television”. In 2012, he was dubbed “the Salman Rushdie of County Mayo”. 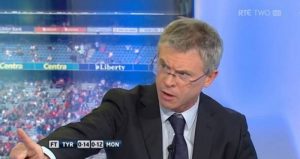 As a barrister he has specialised in criminal matters and has defended Irish republicans in court.

He was involved in a UK Supreme Court case in 2011 that established a right to compensation for a miscarriage of justice without the requirement to prove the innocence of the wrongly convicted person (in this instance the Derry republicans Eamonn McDermott and Raymond McCartney).

He also works as a journalist, writing a column for Gaelic Life and the Ireland Mail on Sunday. A radio and television football pundit,] he is a regular on the long-running RTÉ programme The Sunday Game.

A campaigner to make organ donation the norm in Ireland has said he will not rest until positive changes are made in the law, Joe Brolly, who gave a kidney to friend and fellow GAA coach Shane Finnegan, is an advocate of support for changing the law to an opt-out system of organ donation across Ireland.